It all started with a ‘Happy Dog’ painting: Inspiration from children in China

It was the 1st of June 2019, national Children’s Day in China. The Tang Hu museum in Wuhan organized an art exposition with the best drawings and art projects from all primary and middle schools of the city. Students and the art teacher of the WYIS school, including my son Matteo, were invited to the museum to receive first prize for the best art project, along with other selected works from other schools. As a proud mother, I joined the event, along with other parents from WYIS. While looking through the museum catalogue, I saw the painting of a “Happy Dog”. It looked like the dog was smiling! Beside the painting there was the caption that said: “Made by Wu Xueyu, 8 years old”. Immediately, I began thinking: “What if I can organize a rabies event where the children could be the protagonists, the real drivers of the event?”. 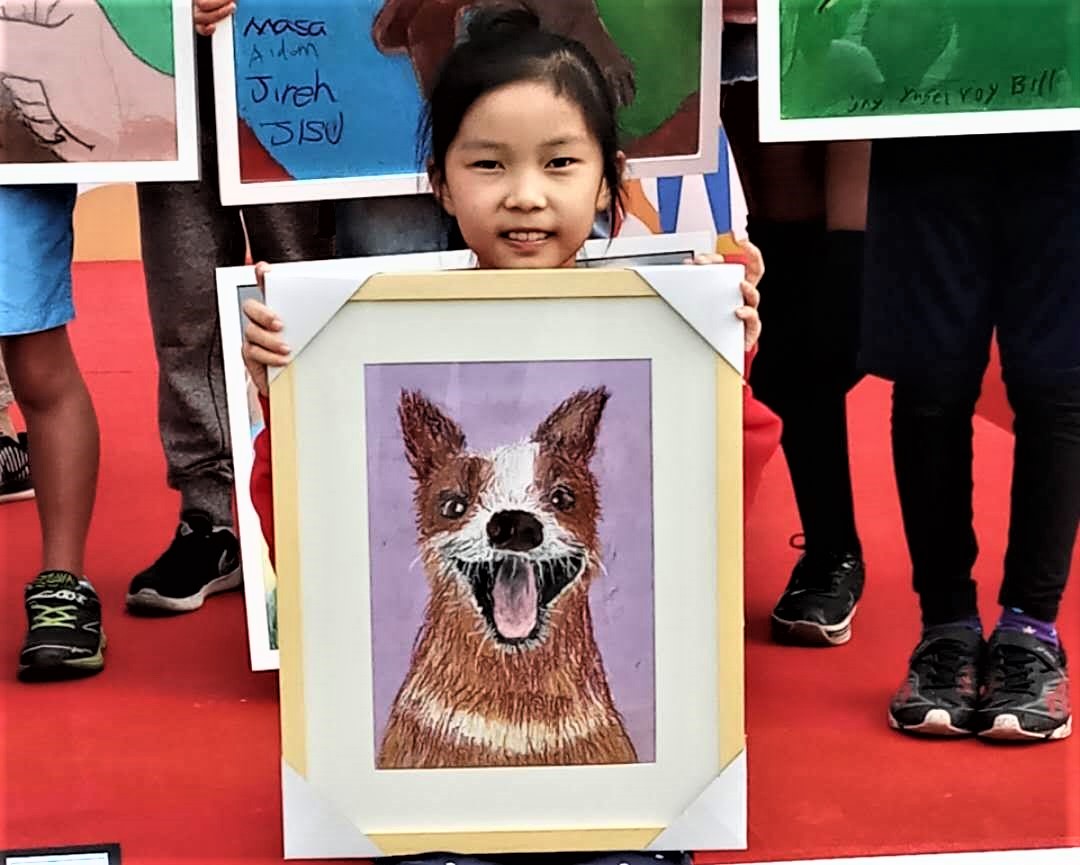 I asked a manager of the Tang Hu museum if he could contact Wu Xueyu’s family to ask if the girl could sell her painting to me. After a few weeks, the museum manager responded, saying that the girl had agreed to give me the painting for free. A few months later, a veterinary hospital from my district reached out to me, asking to help them organize a rabies event to celebrate World Rabies Day. This was the perfect opportunity to organize an event that included the children. I spoke to my son’s art schoolteacher and asked if she could have the children of her classes draw paintings on the subject of ‘human-animal interaction’. The idea was that they could then sell their pictures during the rabies event to collect money for a stray animal shelter of their choice.

"I wanted the children to understand that they have the power to create changes, to make a difference for somebody." - Dr Sara Platto

I wanted the children to understand how to raise funds for a worthy cause by including them in the entire process, from initial planning to the final event.

We contacted Wu Xueyu’s family to invite them to the campaign and placed her painting as the centerpiece at the event, as she was the initial inspiration. The children of WYIS school made 22 paintings that were showcased and sold by silent auction at the event on the 2nd of November. The children also prepared speeches on the importance of taking care of the pets and stray animals. During the event, Wu Xueyu told the story behind her painting. She said: “One day, I was going back to my hometown with my parents. Suddenly, we saw a small dog on the street. He was hurt and dying. I realized that he was like that because nobody had helped him. We couldn’t do anything. I was shocked about his misery. When I went home, I drew this painting because I wanted to give the dog a different ending. I wanted him to be a ‘happy dog’.” Wu Xueyu also asked the adults to take care of their pets and any animals in need of help that they may encounter on the street.

"Everything about this rabies event was about the children and the animals."

The children sold all the paintings and collected approximately US$800. They chose to buy food for dogs and cats, litter for the cats, and 70 rabies vaccines that were donated to a local shelter owned by an old Chinese lady who has collected and looked after stray animals for more than 30 years.

This was the story on how a rabies campaign was possible because of a little girl’s painting of a ‘Happy Dog’s Face’. We should always remember that our children have great power and can make a huge difference in this world.